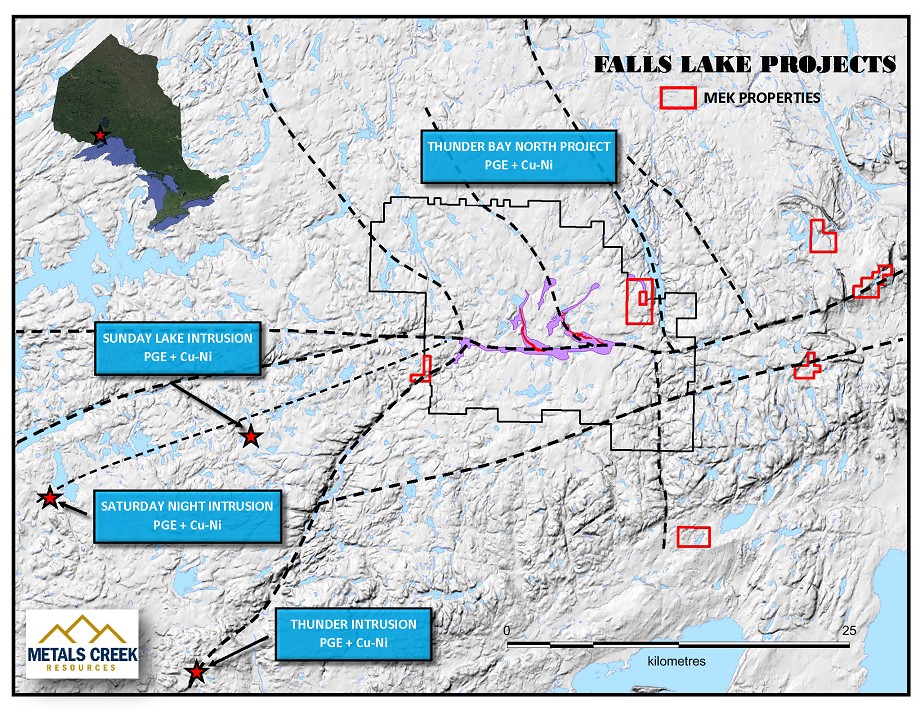 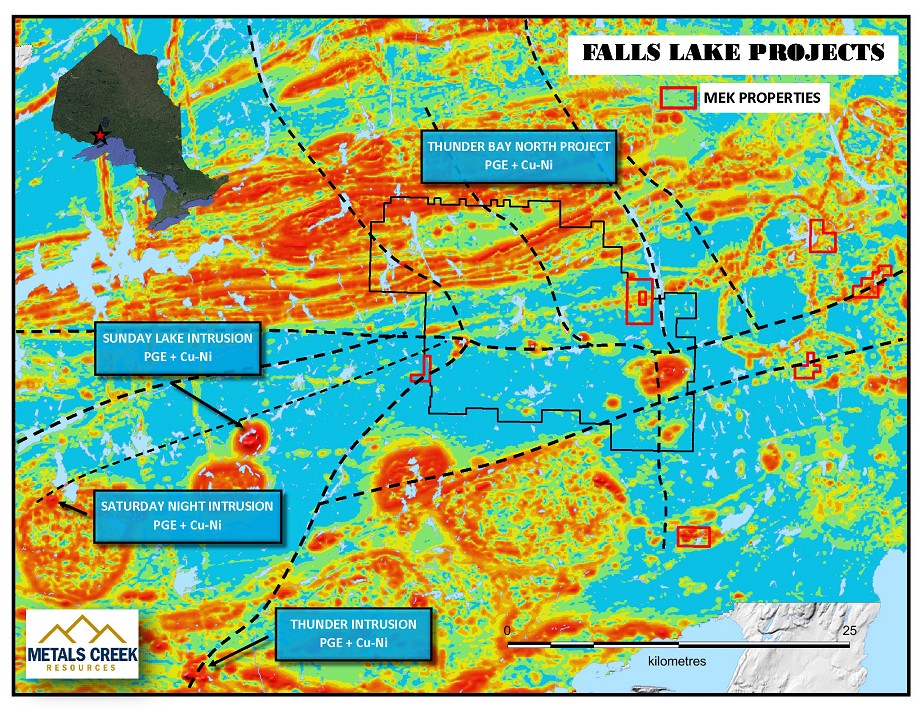 The five recently staked claim blocks that comprise the Falls Lake PGM project exhibit discrete magnetic signatures similar to that of the magmatic conduits present on the TBN project which host the PGM-Cu-Ni mineralization.  Also associated with the recently staked claim blocks are lake sediment anomalies which exhibit similar profiles and pathfinder elements to the lake sediment anomalies present within the area of the magmatic sulfide mineralization at the TBN project as well as structural breaks proximal to these prospective anomalies.

The closest Metals Creek claim block to the TBN project contains a portion of the Greenwich Lake Intrusive Complex which is interpreted to be a part of the same magmatic conduit system which hosts the TBN mineralization and ties on to their current land holdings.

Alexander (Sandy) Stares states “Metals Creek is fortunate in that our VP Exploration, Michael MacIsaac, held various positions including Exploration Manager with North American Palladium (Lac Des Iles Mines) from 1998 to 2008 and MEK’s Senior Project Geologist Don Heerema was an exploration Geologist at NAP from 2002 to 2008. Both Geologists have extensive PGM-Cu-Ni experience and were instrumental in a number of the discoveries at NAP including the Offset Zone. Management believes that the TBN and Sunday Lake discoveries are forming the basis of a new PGM-Cu-Ni camp. MEK personnel will continue to compile historic data and once field season arrives, the company plans to map and prospect these claim blocks.”

Michael MacIsaac, P.Geo and VP Exploration for the Corporation and a qualified person as defined in National Instrument 43-101, is responsible for this release, and supervised the preparation of the information forming the basis for this release.

Metals Creek Resources Corp. is a junior exploration company incorporated under the laws of the Province of Ontario, is a reporting issuer in Alberta, British Columbia and Ontario, and has its common shares listed for trading on the Exchange under the symbol “MEK”. Metals Creek has earned a 50% interest in the Ogden Gold Property from Newmont Corporation, including the former Naybob Gold mine, located 6 km south of Timmins, Ontario and has an 8 km strike length of the prolific Porcupine-Destor Fault (P-DF). In addition, Metals Creek has signed an agreement with Newmont Corporation, where Metals Creek can earn a 100% interest in the past producing Dona Lake Gold Project in the Pickle Lake Ming District of Ontario.

Additional information concerning the Company is contained in documents filed by the Company with securities regulators, available under its profile at www.sedar.com.