The Company has received exploration permits to conduct diamond drilling, line cutting and ground geophysics with priority focus on the Thomas Ogden Zone and Naybob South. The exploration program is expected to commence in the coming weeks.

Diamond Drilling is expected to commence the latter part of July, dependant on drill rig availability. The Thomas Ogden Zone will be the main focus of the upcoming diamond drill program with emphasis on further defining the orientation of high-grade cross cutting veins as well as mineralization associated with cross-cutting structures as seen down plunge along the Thomas Ogden fold structure. Core orientation will be utilized. Ground geophysics consisting of Deep Section Induced Polarization (IP) will also take place over Naybob South, Thomas Ogden (TOG) and Thomas Ogden West (TOGW) to help further define mineralization down-plunge associated with fold structures of TOG and TOGW as well as further defining the plunge direction of known sulfide mineralization within Naybob South.

Metals Creek is also planning additional SGH sampling for the remaining portion of the property based on the success of the initial SGH program (See Metals Creek News released dated 22 Feb 2021).  Phase 2 will continue to fill in gaps between TOG and South Zone, as well additional sampling to both the eastern and western boundaries. With greater than 97% of the project covered by overburden, SGH can greatly expedite the target generation process, potentially resulting in substantial cost savings when evaluating and ultimately delineating these potential targets. Samples will be collected on 100m spaced grid lines with sample spacings of 25m like that of phase 1.

Alexander (Sandy) Stares states, “We are delighted to recommence exploration at the Ogden Gold Project. With funding recently secured from Crescat Capital, we have the required capital to kick start exploration in the Timmins Camp. This should prove to be an exciting summer/fall for Metals Creek shareholders as we will be active at both Dona Lake and Ogden”.

About the Ogden Gold Project

Work on the property by Metals Creek since 2009 has consisted of ground geophysical surveys which include magnetics and induced polarization (IP), down-hole IP, as well as 137 diamond drill holes totaling 35,830m.

The Ogden Gold Project covers 8 kilometers of the Porcupine Destor Fault, which is the key conduit for gold mineralization in the Timmins Gold camp. (See figure 1, Timmins Gold Camp). There are five known gold zones on the property, with TOG and Naybob South seeing the majority of the work. (See Figure 2, Known Gold Zones).  Drilling in 2012 and 2013 on TOG greatly enhanced the corporations understanding of the geological and structural complexity within TOG and their control on gold mineralization. The gold mineralization is associated with alteration zones within porphyry dikes and Timiskaming sediments. The alteration consists of strong albitization and silicification, with varying amounts of pyrite, arsenopyrite mineralization and commonly with associated visible gold. Significant folding is present with enhanced gold grades along the fold hinges.  These fold hinges have a gentle plunge to the east. Select results from these drill programs include:

Upon performing a re-interpretation of the ground geophysical data in conjunction with applying known structural trends known for hosting gold mineralization in the Timmins Gold Camp, a new discovery (TOG West), 1 kilometer west of TOG resulted in an intercept of 5.20g/t Au over 2.90m.  More importantly, this intercept resulted in the identification of a second fold structure parallel to that of TOG.

The Naybob South zone is described as a zone of intensely albitized mafic/ultramafics with abundant pyrite and arsenopyrite.  Drill intercepts for South Zone include;

All above mentioned drill intercepts are within 150m of surface.

Michael MacIsaac, P. Geo and VP Exploration for the Corporation and a qualified person as defined in National Instrument 43-101, is responsible for this release, and supervised the preparation of the information forming the basis for this release.

Metals Creek Resources Corp. is a junior exploration company incorporated under the laws of the Province of Ontario, is a reporting issuer in Alberta, British Columbia and Ontario, and has its common shares listed for trading on the Exchange under the symbol “MEK”. Metals Creek has earned a 50% interest in the Ogden Gold Property from Newmont Corporation, including the past producing Naybob Gold mine, located 6 km south of Timmins, Ontario and has an 8 km strike length of the prolific Porcupine-Destor Fault (P-DF). In addition, Metals Creek has signed an agreement with Newmont Corporation, where Metals Creek can earn a 100% interest in the past producing Dona Lake Gold Project in the Pickle Lake Mining District of Ontario.

Additional information concerning the Corporation is contained in documents filed by the Corporation with securities regulators, available under its profile at www.sedar.com. 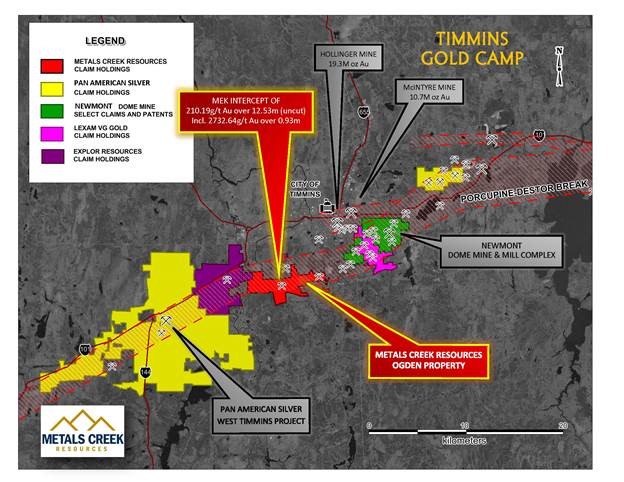 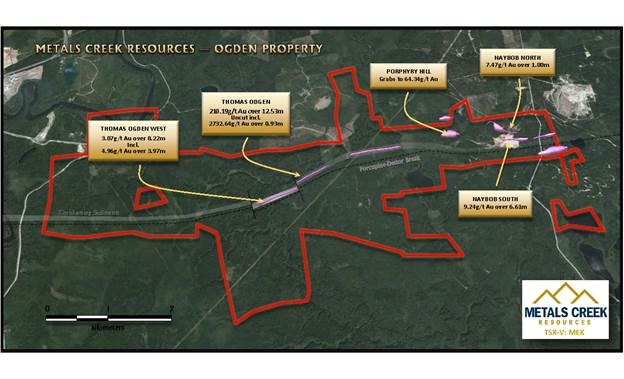 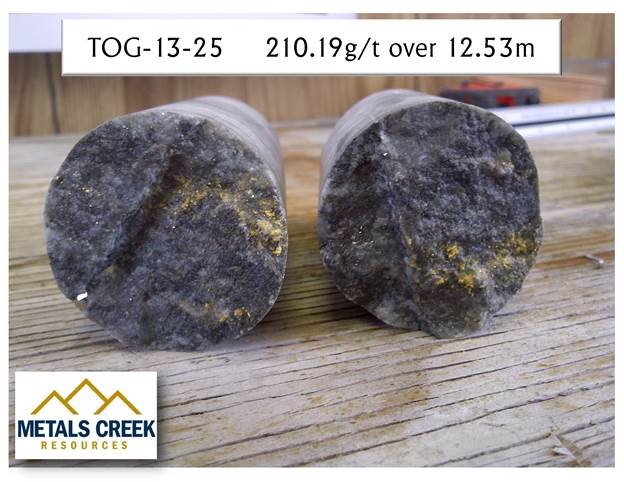